Airport workers take walk on the wild side 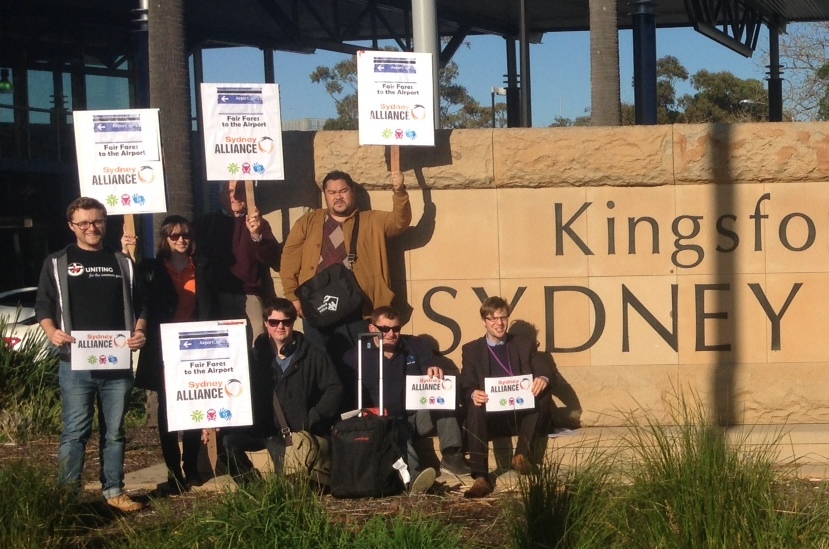 Airport workers and community members took to the streets of Mascot today to highlight the need for more affordable public transport to Sydney Airport.

Sydney Alliance Transport Spokesperson Kurt Iveson said workers pounded the pavement to demonstrate the high cost of train fares, along with the dangers and inconvenience of forcing people to walk the last leg of their trip from Mascot.

“The Minister for Transport is expected to announce her response to the Upper House report into the $12.60 Station Access Fee for train tickets at Sydney Airport later this week,” Assoc Prof Iveson said.

“It is clear that the local community and airport workers agree with the findings of the report, and agree that the Station Access Fee needs to go.”

Assoc Prof Kurt Iveson said the State Government had announced a $21 weekly cap on the Station Access Fee for Opal Card users, however this would still leave thousands of low-wage workers paying an extra $1,000 a year to use the Airport train stations.

“How can a teenage retail worker on minimum wage be expected to pay a $1,000 annual fee on top of their normal train fares?   It’s just not fair.

“With the NSW poised to receive 85 per cent of the revenue from the Station Access fee, even a reduced Access fee still operates as a tax on baggage handlers, security officers, retail staff and hospitality workers – many of whom are on low incomes.

“Only 12 per cent of workers airport employees travel to work by train.  The excessive cost of fares is a major reason why the airport rail line remains such an under-utilised public asset, and why roads around the airport are so congested.”

“There are an estimated 28,000 people working in the airport precinct, so there is a large untapped market for public transport if it is priced appropriately.

“We estimate that doubling the current patronage to the Airport stations would result in a net gain to the State Government of almost $1 million a year.”

The Sydney Alliance has been running an on-line petition calling for the State Government to remove the station access fee at Sydney Airport.  The petition is available at www.sydneyalliance.org.au/airportfee