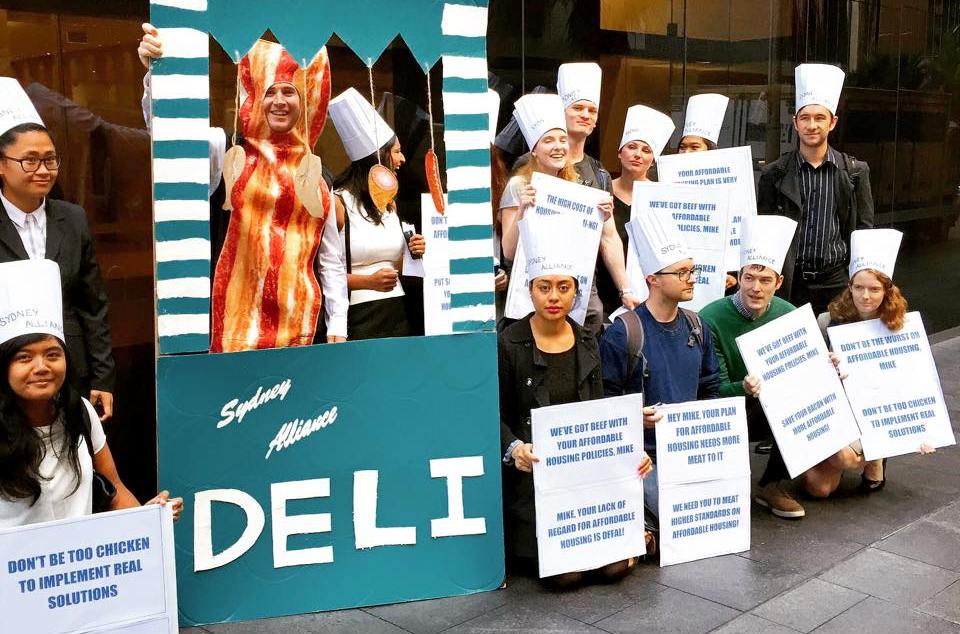 “Mike Baird- put more meat on your plans for affordable housing” read the signs being carried by some of Sydney Alliance’s youngest leaders this morning.

Whether they were from Youth Action, Uniting Church, Catholic Church or the union movement – a dedicated group of young people from across Sydney gathered today outside the Government’s offices at 52 Martin Place to send Premier Mike Baird and the Government a message.

The #housingstress campaign organised by  Sydney’s largest coalition of civil society organisations has been astoundingly successful at putting affordable housing on the agenda.

Leaders from Alliance partner organisations have been vociferously inserting the issue into every BBQ, inquiry, forum, feed, synod, summit, debate and dinner that a government member has cared to grace. At eight assemblies in local suburbs across Sydney, 2658 local leaders squeezed out commitments from MPs and decision makers.

Add to these dignified civic assemblies a couple of cheeky morning stunts – (last week the Auxiliary Catholic Bishop of Sydney Most Rev. Terry Brady and former Uniting Church Moderator Rev. Niall Reid joined 84 young people as they took furniture, banners and a removalist truck out the front of Parliament House to ‘Move in with Mike’) and civil society has come at the issue from every demographic!

The fruit is showing. Mainstream media are consistently covering the issue. Alliance leaders have been heard in all flavours of talkback radio and read in all hues of ink. Last week, the NSW Liberal-National Coalition made a commitment to leverage 1 billion dollars through public and private money for affordable housing. The NSW Labor Opposition endorsed all three of the Sydney Alliance asks on Saturday.

However tension is high. The Coalition still hasn’t committed to targets for affordable housing. Whilst there is an MOU with Infrastructure Partnerships Australia and the NSW Council of Social Services, there is no attached plan, no targets and no timeline.

Hence the worry of Sydney’s young leaders 'hamming' it this morning with signs that read, amongst other puns:
"The cost of housing is salaming!”
“The State Government has put forward a Baird-bones policy”
“The steaks are too high on housing to ignore”
“The lack of a housing plan is offal” and
“We need to meat higher standards on affordable housing”.

Civil society has the right to be worried. After the last election campaign of promises and sense of openness, the NSW Government went into its shell. It took years for the Alliance to build up trust in our non-partisan nature to get face to face with the government.

Senior ministers continually refused to attend our large town hall assemblies ...until months before this election –September 2014, when Minister Gladys Berejiklian faced the local leaders of Sutherland and St. George in Gymea at our first local assembly.

This can’t happen again. The Alliance is a permanent coalition built on strong relationships between the partner organisations. Putting affordable housing on the election agenda was a major achievement. But until there are clear targets and timelines attached to affordable housing, indeed, until the people of low income in this city start moving into affordable homes - the NSW Government of any political bias can expect Sydney’s civic organisations to be at their doorstep; in their meeting rooms; at their events; organising the local citizens of Sydney to have their voice heard.