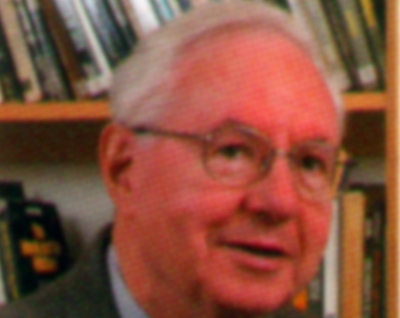 Dr Edward T Chambers has passed away, aged 85.  Dr Chambers was a philosopher and a political organiser.  Notably he was the executive director of the Industrial Areas Foundation (IAF) from 1972 to 2009, a community organising group founded by Saul Alinsky.

He is the author of Roots for Radicals: Organizing for Power, Action, and Justice, the advanced source book for achieving progressive goals.

Dr Chambers is credited with developing systematic training of organisers and leaders of congregation-based community organizations, and establishing relational meetings (or "one-on-ones") as a critical practice of organisers.

He trained Barack Obama in street organising when he moved from the Harvard Law Review to Chicago's South Side; and in the difference between what is, and what should be!

What follows is an obituary given by Neil Jameson, director of Citizens' UK, based in London and an affiliate organisation of the IAF:

I am saddened to share the news that Ed Chambers died yesterday.

He was 85. He has been living quietly with his family in Skibbereen, County Cork in Southern Ireland since he retired from IAF in 2010.

Ed was recruited by Saul Alinsky. He became the founding Director of the modern IAF in 1972 when Alinsky died.

He is responsible for taking the best of Alinksy’s ideas and knocking them into shape; he is responsible for the unique Curriculum which binds us together and provides ‘the argument’ which has sustained Citizens' UK (CUK) and IAF for 45 years; he is also responsible for building and sustaining the career of Community Organising, as we now know it.

Ed Chambers' legacy for Civil Society is enormous – the millions of civic leaders who now practice politics with the tools he created; the hundreds of professional community organisers who now practice the ‘art of politics’ as he described it; the manifold campaigns that have been won and causes championed across the world which sustain and protect Civil Society; the numberless civic institutions that have benefited from his focus and respect for the life and soul of local congregations and associations (including the Roman Catholic Church, even though he was thrown out of the Seminary for lobbying against the regular use of the Mass in Latin!).

In Canada, the USA, Germany, Australia and here in the UK – where we share the ‘IAF’ discipline and ‘argument’ -  we have so much to be grateful for from Ed Chambers.  His love and respect for people and their institutions (as well as his own family) was his self-interest. His consequent hostility to the elites that patronise, exploit and ignore the millions upon millions of families that seek the recognition and rights that are usually only attributed to the few was inevitable and gained him the reputation of being an angry man.

I have much to be grateful for (even though he initially argued I was too old to start Organising (at 42 years) and had probably been corrupted by the sinecure of being a senior manager in a NGO). I had also been a social worker – a profession he often blamed for keeping people powerless and in poverty and not releasing them from both by teaching them to organise. Nevertheless, once we got over these hurdles, he proved a generous, reasonably patient and kind mentor – spending time in the UK supporting our faltering steps at National Training and then ‘running’ with me and Sr Mary McAleese especially in the first few years after the founding of CUK in 1989.

Ed even chose to spend his 70th Birthday with us in 2001, at an ‘economy hotel’ in Walthamstow which was hosting a CUK National Training.  The public action was a 1,000 person Assembly to launch the Living Wage Campaign. This was covered by Andrew Marr as Political Editor of the BBC and made the national News at Ten. I remember TELCO leaders scored the Assembly a B+ and the trainees were even more generous with a A-.

Ed gave the Assembly a personal B- (too long; a bit boring; some empty seats!). He was worried that too much praise would go to our collective heads when there was so much else to do and so many hurdles ahead of us.

Bernadette Farrell and I visited Ed and his family in April 2013 at Skibbereen. We thanked him for his leadership and teaching and shared some of CUK’s story and progress with him. He was gracious and generous with his praise, even though his health was declining.

Coincidentally the Chambers family will gather for a private ceremony, in the beautiful garden of the family home in Ireland, to remember and recognise Ed on Monday afternoon 4th May. This will happen just as we Call the CUK General Election Accountability Assembly to Order.

We owe Ed Chambers a tremendous amount – and would probably not be doing what we are doing without him.

Please remember Ed - and Anne, his wife, his five children and several grandchildren in your thoughts and prayers.