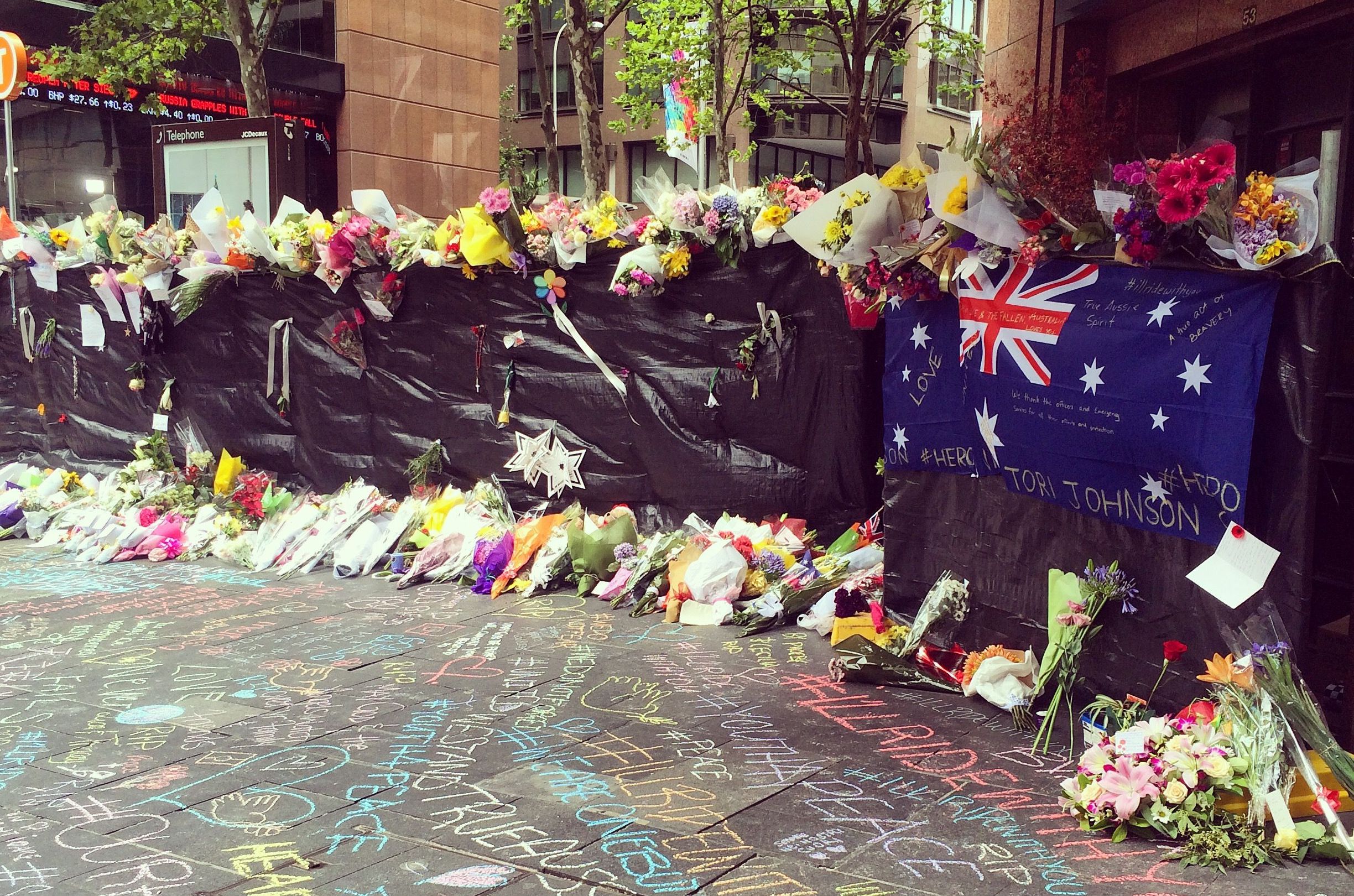 On Monday morning at 10:34 am, I got an SMS from my sister saying “stay away from Martin Place!” My heart skipped a beat. I had only just left the Queen Victoria Building, where my mum had picked up my 4 year old son so they could go off and look at the Christmas decorations in the city.

Then another SMS seconds later – “just spoke to mum she said you were going to a meeting. Hostage situation in Lindt Chocolate.” I tried calling my mum, but couldn’t get through. I assumed that they were okay (even though, despite a lot of calls, I didn’t get to speak to my mum till about midday). I then called and sent a message to my husband, saying “don’t go to Martin Place”. I got a message back saying “I’m down at Wynyard. Might not head past there…”

This kind of shocking panic was repeated all across Sydney. We didn’t know what was happening, and in the first moments of finding out about the Siege, we were terrified.

I got a message 15 mins later from my husband to say “our building is in lock down.”  And then minutes after that, I find out that the Polding Centre – the home of the Catholic Archdicoese – is in lock down.  A few minutes later, my colleague at the Sydney Alliance sends me a message “don’t come into the office – we are in lock down.”

I was struggling to interpret what was going on. I was anxious and finding it hard to think straight.

But, unlike many Sydneysiders, I have some very deep and close relationships with leaders in Sydney’s Muslim community. I am a community organiser, and for the past seven years I have been working with people from all across Sydney’s civil society to build a massive Alliance that aims to strengthen our civil society and our community voice.

I have known Maha Abdo, the Executive Officer of the Muslim Women’s Association for a long time. I met her in January 1993 when I was 17 while undertaking interviews for a school research project. I am now 37. That project was my “Personal Interest Project” for the Year 12 subject “Society and Culture.” My project was called “Religion through Rose Coloured Classes – a personal perspective on three religions: Islam, Christianity and Judaism.”

That project took me into synagogues, churches, and to Lakemba Mosque. I vividly remember that day. My mum dropped me off outside the Mosque on her was to my grandparents house in Kingsgrove. So there I was, a 17 year-old girl who had grown up (mostly) on the North Shore of Sydney, standing in Lakemba. I walked into the ramshackled, orange brick building that sat next to the Mosque to interview a person called “Maha.” She had kindly agreed to spend an hour with me, a completely random student. We had never met. I had organised the interview by cold calling her office. I am just lucky she said yes.

Over the next hour and a half she taught me about what it was like to be a Muslim. Why she wore a head scarf and what she believed. She took me on a tour of the Mosque. The whole experience was completely new for me. When we parted, I walked up the street to Lakemba Train Station and took the train home, back to the North Shore.

I loved writing that project. At the time I described myself as a Christian. But in the years that followed my sense of my faith and spirituality changed. I bounced between thinking I was an atheist to thinking I was agnostic. I occasionally went to church, when one of my old school friends invited me. But I didn’t find what I was looking for in that space.

Then in 2009, I returned to the Muslim Women’s Association (MWA) to meet with Maha. My fellow community organiser, Rathana, had been meeting with Maha's MWA to get them more involved in the Alliance, and had suggested I join him at a meeting.

That meeting, on reflection, changed my life.

In community organising language, that meeting was a “relational meeting.” Relational meetings are one to one conversations where, through questions and story telling, we share and explore what makes us tick. Why do we do what we do in public life?

It wasn’t long into that conversation that Maha told me how difficult it was to be a Muslim woman in Sydney at the moment. She told me stories of the time after September 11 when women were being attacked, including an incident where a woman had her hijab ripped off her head.

The story struck a chord with me. Not because I could directly relate to Maha’s experience. It wasn’t simply that I felt deep sympathy for Maha. My connection to the story was that it dislodged an old memory of mine that, in 2009, I hardly ever talked about.

The memory was my experience of recovering from a severe illness when I was a teenager. When I was 19 I had been hospitalised for two months with a severe health condition. The experience had left me isolated. My family visited me every day, but I was in Hornsby Hospital and it was a long way away from many of my friends, so it was hard for them to visit often.

After two months in hospital, returning to life, and to university was by far the hardest experience in my life. I had terrible anxiety in public places. I felt very unstable. I felt I couldn’t talk to people about my experience – it is hard to find people who can “empathise” with being in hospital for so long. I saw a social worker a few times, but we didn’t connect. It was a lonely time.

All that happened a long time ago. But when I met Maha, that memory welled up inside me. So I told her my story. I told her how recovering from my illness was the hardest and best thing I had ever done in my life, and yet I had been subject to abuse and judgement in the years after than experience.

You see, I was in hospital suffering from a breakdown. In the three years following my release from hospital I was repeatedly judged cruelly for my illness. When I ran for a leadership position in the National Union of Students, someone said “don’t vote for her because she is unstable.” When I applied for a job, a well meaning but misguided friend told the employer about my history of illness. When I had a disagreement with a fellow editor of the student newspaper he went behind my back and told people that “I hadn’t been taking my medication.”

Recovering from my illness was the hardest and bravest thing I have ever done. So that day, I told Maha that I could really feel what a remarkable struggle she must have had to keep her faith after September 11. Her religious practice is the best thing in her life, yet people have judged her harshly for that. I told her that I didn’t know what it is like to be a Muslim, but I know what it is like to be sneered at.

We cried together that day. And Maha, and her college Wafa made a decision then and there to get deeply involved in the Sydney Alliance.

So on Monday 15 December, after I found out that my family was okay I sent text messages to Maha Abdo and Joumana Harris, the President of the Muslim Women’s Association. We stayed in contact all day. We exchanged messages like this:

“Thank you so much for your support. I have spoken to Maha … you are a great source of strength for us. These have been very difficult months and I know they will only get more difficult. The support of our non-Muslim friends has been amazing. From the bottom of my heart thank you.”

“Lets pray and work for a peaceful society we want our children to live in. Thanks Amanda, our hearts are heavy.”

So this week, as the founder and Executive Director of the Sydney Alliance I knew that I had to step up and lead. I had to help connect with the trauma of the siege, the fear in the city and the risk that people might blame a religion for the horrible actions of an individual.

I went into Martin Place several times. It is a citizens’ shrine, created by the people of Sydney to embody our collective grief. It is a remarkable place. I feel so proud to live in a city where we can express ourselves so tenderly, so quietly and with such deep emotion.

Very early on Thursday morning I ran into the city. I watched the sun rise over the buildings as I edged closer to Martin Place. This time it the square was almost empty. It was 6am. I was able to walk right up to the memorial and read the messages.

The thing that surprised and overwhelmed me was the smell. The flowers reminded me of when I was in hospital after the birth of my first son – the rich smell of pollen. Martin Place, for me, was both a symbol of death and birth.

We experienced a devastating tragedy on Tuesday 16 December. When I woke early that morning and read the news I let out an involuntary cry – “oh no.” Like everyone I had hoped that it could end without death. The sorrow and grief is immense. Like many people, good friends of mine went to university with the victims. There is so much pain and sorrow for two lives ended too soon.

But out of the ashes of this tragedy there is a seed of hope. There is the possibility of new life. New life for our city. All across Sydney we are reaching out to each other, we are seeking comfort in our communities as we try and understand and interpret what happened.

The spontaneous online messages - #illRideWithYou – the physical Olive Ribbon emblem “Olive Ribbon” (#OliveRibbon) are symbols that we are using to help us express both our sorrow and our hope for a better world.

In 2005 when the Cronulla Riots occurred I felt a deep sense of sadness and shame. I was devastated that such rage could be expressed in my city. Today, in 2014, we are in a different place. Things have changed. We have seen our city come together in an extraordinary and remarkable way.

Our challenge now is to sustain the good will we see in Martin Place, and across the city, into deeper relationships of trust and understanding. We need to strengthen the relationships we already have between our churches, community organisations, Synagogues, schools, unions and Mosques. It will be these relationships of understanding and trust – between and across civil society – that allow us to anchor our democracy, create an empathetic citizenry and to build a city that works for the common good.

And to that end, the Sydney Alliance will work over the following weeks, months, years to help us deepen our connections and trust. We need to meet each other. We need to know each other in order to trust and love each other. That is the hope I have for Sydney.