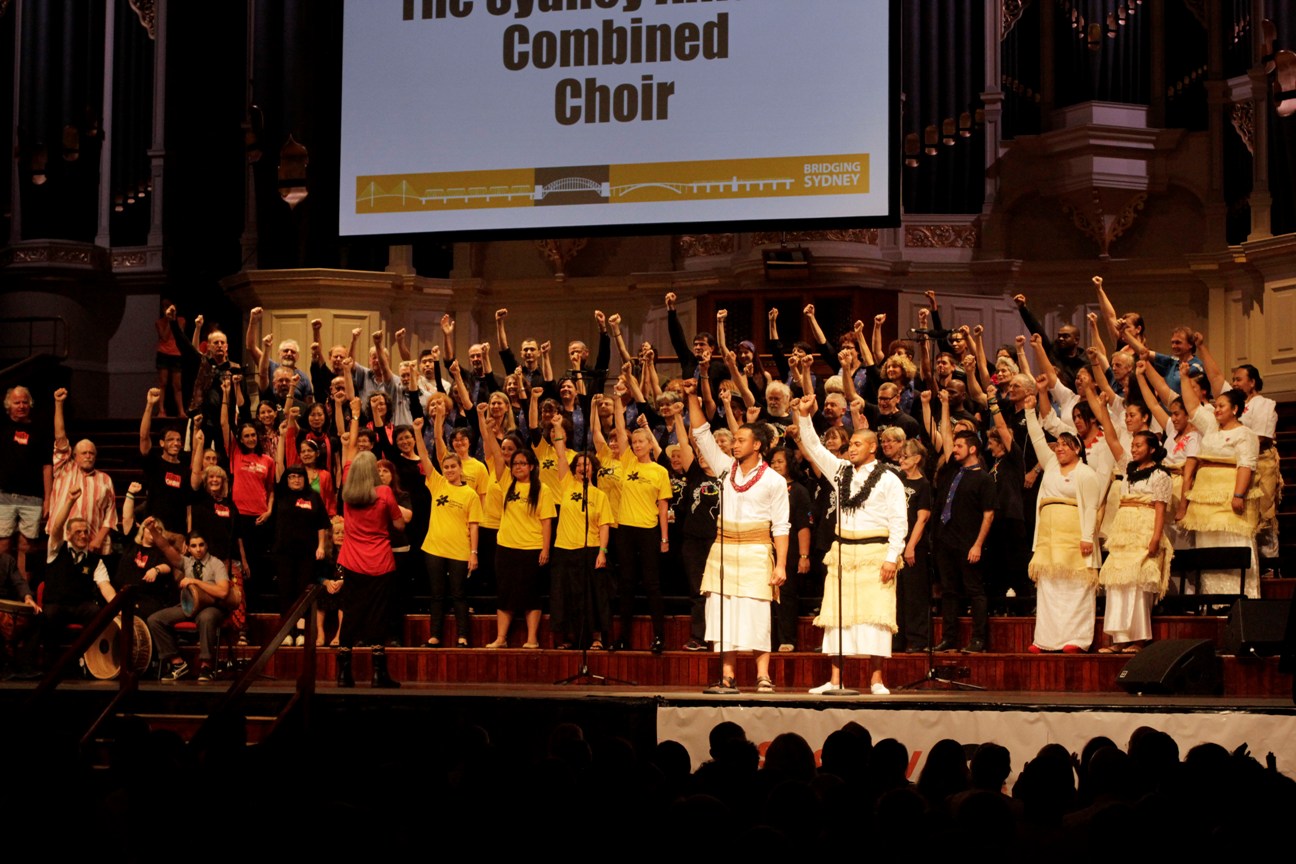 At 6:15 in the evening the Sydney Town Hall seemed to shake to the sound of Korean Drums. Out the front on the steps, half a dozen construction union Korean Tillers were sharing their percussion skills as loudly as they could.

To the side of the Town Hall, a rugby line formed. Fifty catholic school children stood in formation creating a corridor through which hundreds of Catholic parishioners, priests, social service workers and other school students ran on their way into the Town Hall.

Somewhere between 1300 and 1500 people spilled into the Sydney Town Hall on Wednesday 26 March to be part of the launch of the Sydney Alliance Election Agenda at the Bridging Sydney City Assembly.

It was an unusual space. It had the quality of a reunion. Even though the group was remarkably diverse – Granville Boys High with the Nurses and Midwives union, Cancer Council and the Baptist Association, NSW Jewish Board of Deputies and the Uniting Church – these people knew each other. They had trained together at Sydney Alliance 2 and 6 day trainings. They had worked together in Districts or at city-wide Action Council meetings. They had met each other and got to know each other through thousands and thousands of one to one meetings. They were with their colleagues, having been asked to turn out on the night by the organisation of which they are a member.

The Bridging Sydney Assembly was a demonstration of the power of public relationships.

It was also a representation of the power of story. It was a night of story telling – stories of how the Sydney Alliance was created, stories of why we had gathered. Stories about the power of people acting together for the common good. The room erupted when Anita Tang from the Cancer Council shared her experience of the Cancer Council’s campaign to restrict the sale of tobacco.

The most powerful stories were testimonies. Shaynan Carney, a young Aboriginal man who lives in the Glebe Housing Estate told the room about his desire to work. He shared how important a job would as it would provide him the independence to get his own place. The room leaned in and silently listened.

Jesse Wilcox told his story of how he became homeless, and how access to community housing changed his life.

Across the night the Assembly outlined one massive election campaign.

The campaign covers three topics – housing, transport and job opportunities. Seven very clear “asks” were outlined. These were seven solutions to the very real but often vague problems that people face living in Sydney. Over the previous year, hundreds of leaders in Sydney Alliance research-action teams and districts had coordinated listening campaigns to find out what were the most pressing concerns of Sydney-siders. Then, those teams conducted meetings with experts, officials and academics to identify the most appropriate solutions to those problems. Solutions were assessed as to whether they were winnable, deeply felt/widely felt, whether they brought the Alliance closer together, and whether winning those changes could create a domino effect for wider improvements to the city.

The Assembly was a three Act piece of political theatre. Act Three was about inviting the leaders in the room to be part of the campaign. The theory of change was outlined from the stage:

Each of these activities was explained and then people were asked to make commitments based on their interest. Across the room hundreds of people stood up to say they were prepared to host a table talk, and hundreds more sent text messages to their organizational contacts saying they wanted to participate. People were able to sign up to the campaigns at tables at the back of the room, and at 8:30 that evening an email arrived in their inbox that invited them to declare their interest in a range of next steps.

Then, in a line on the stage stood seven boys from Granville Boys High. In their hands they grasped oversized drums and they began to beat. They stood tall as they smashed those drums in syncopatic rhythm. After a minute, they walked down stairs in the centre of the stage into the centre isle of the room. Behind them followed the co-chairs and Assembly speakers. Their progress down the hall was necessarily patient, because the leaders in the hall were thrusting their hands into the hands of the co-chairs and the speakers. Leaders congratulating leaders on a magnificent night, all in anticipation of a massive year long campaign.

Amanda Tattersall is the Coalition Director of the Sydney Alliance